Hello! I'm Merc Fenn Wolfmoor, an ace/aro & ADHD/autistic non-binary author from Minnesota. (How's that for an introduction?)I'm the author of several short story collections and the novella The Wolf Among the Wild Hunt. I've had short stories published in such fine venues as Lightspeed, Fireside, Nightmare, Apex, Beneath Ceaseless Skies, Escape Pod, Uncanny, and more. "This Is Not A Wardrobe Door" was a Nebula Awards finalist story in 2017, and I've had multiple stories reprinted in several different Year's Best anthologies, including Best American Science Fiction and Fantasy, edited by John Joseph Adams & others.Some of my interests include anything about robots (and I love weird AI-generated content, yes), dinosaurs, video games (yell with me about Mass Effect, Dishonored, DOOM, Dragon Age, and many more!), photography, and spoiling my goblin cat, Tater Tot. He is frequently the subject of social media posts. 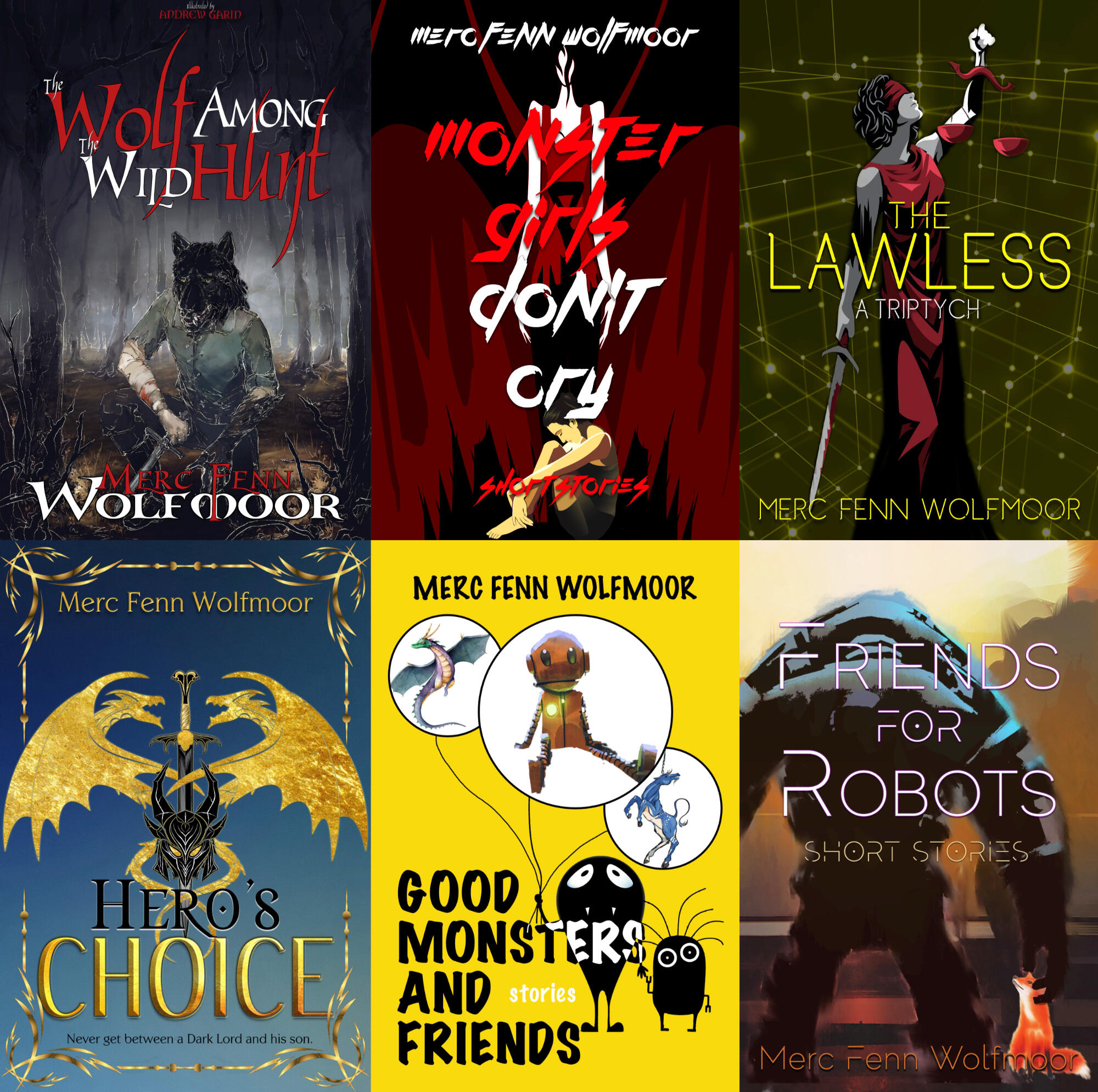 You can check out my longform fiction and short stories (and short story collections, whoo!) on respective pages.Check out my About page for additional biographical wordage and press release materials.Feel free to contact me via the web form, and if you'd like to receive updates, writing thoughts, and freebies, sign up for my newsletter as well. (It contains many Tater Tot photos, of course.)Pronouns: they/them/theirs.Thanks for stopping by!

Current list of published short fiction available online or in anthologies. If you're looking for novels, novellas, or short story collections, click the BOOKS button above. :D 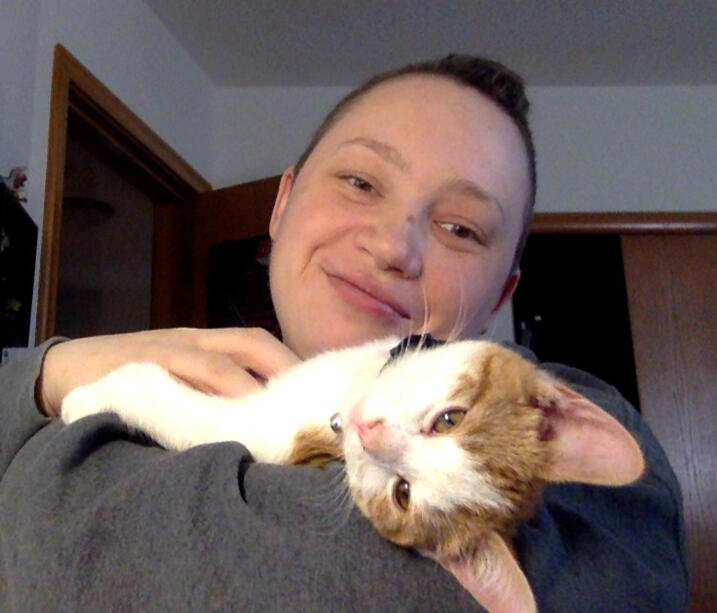 Merc Fenn Wolfmoor is an ace/aro ADHD/autistic non-binary author from Minnesota.Merc is the author of several short story collections and the novella The Wolf Among the Wild Hunt. They have had short stories published in such fine venues as Lightspeed, Fireside, Nightmare, Apex, Beneath Ceaseless Skies, Escape Pod, Uncanny, and more.They have been a Nebula Awards Finalist and have had short stories reprinted in several Year's Best anthologies.They are part of the Chipped Cup Collective, of which Robot Dinosaur Press is an imprint division.Merc also enjoys creating pre-made book covers, available at Bog Wolf Cover Designs.Pronouns: they/them/theirs.
Honorifics: preferably none, but Mx. or Mr. are acceptable if necessary.They are currently not agented. Any rights requests or queries may be directed to Merc either via the contact form or by emailing [email protected]

Please use this contact form for questions or comments. If you are querying about rights availability, please note that in the subject line. Thank you!

Your message has been sent.I appreciate hearing from you!

Books are available in ebook and print formats; you can purchase ebooks directly from me via the PayHip storefront, and paperback editions are available at major retailers such as B&N and Amazon. Click on a title to get information and purchase links!

Looking for more? Sign up for the newsletter and you will get updates about new releases and pre-orders as soon as they are available! 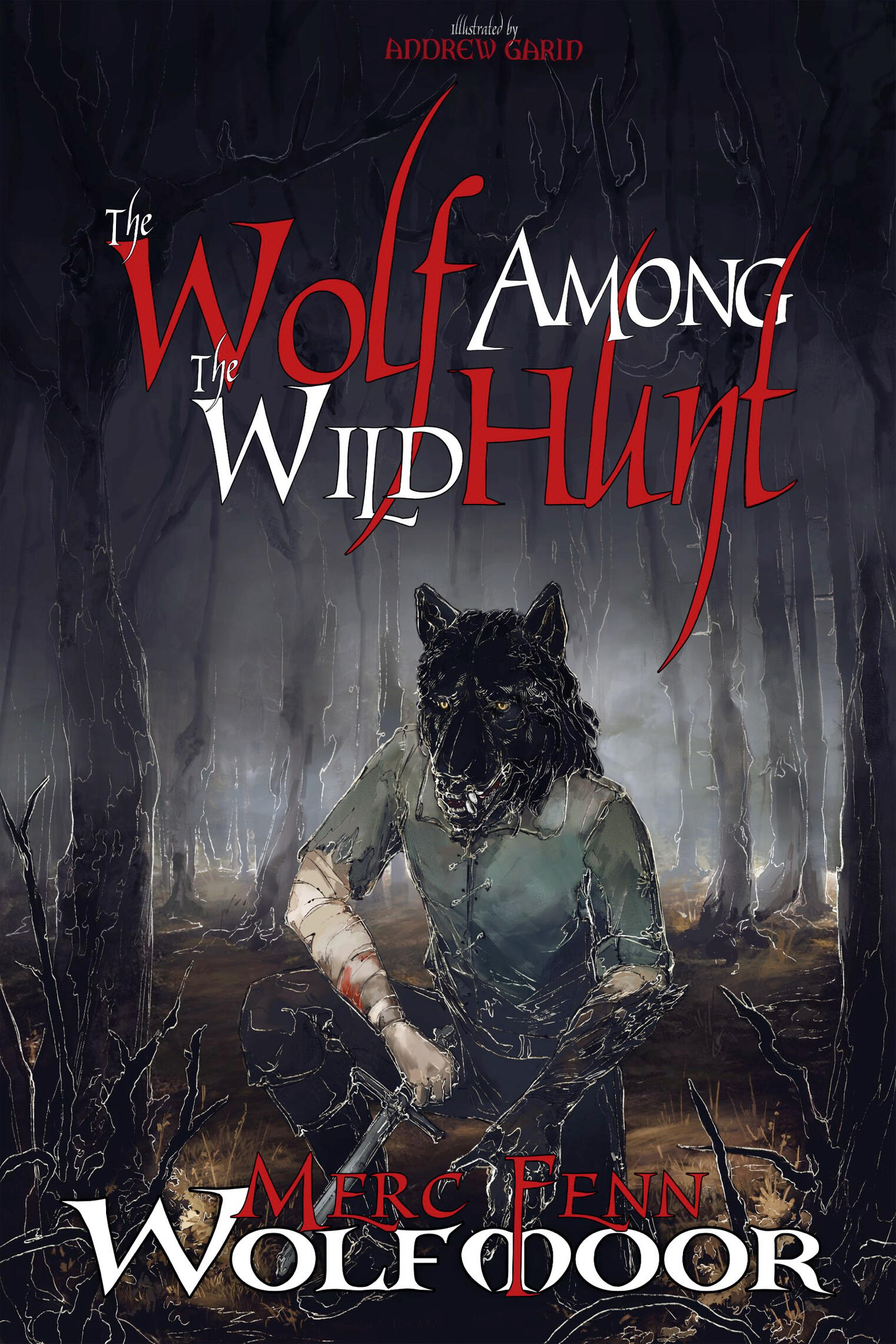 Skythulf wants to live. Raised in the fight pits, trained to kill or be killed, he yearns for freedom that's out of reach. He's a scythewulf: a wolf-shifter considered neither fully man nor beast, his life worth nothing to his keepers…until Brennus, knight-champion of Saorlland, rescues him from certain death and offers him a new life.When he mistakenly kills a corrupted nun, Skythulf has one chance to redeem himself and restore his honor. He must run with the Wild Hunt: an age-old trial of blood and courage, where every step hides peril and carnage. If he survives, he will be pardoned. If he fails, Brennus will die brutally at his side.Few have ever returned from the fae-haunted land, where horrors unnamed dwell beside the enchanted and the damned. There is no rest, no relent, and no mercy.In the Wild Hunt, you run or you die. 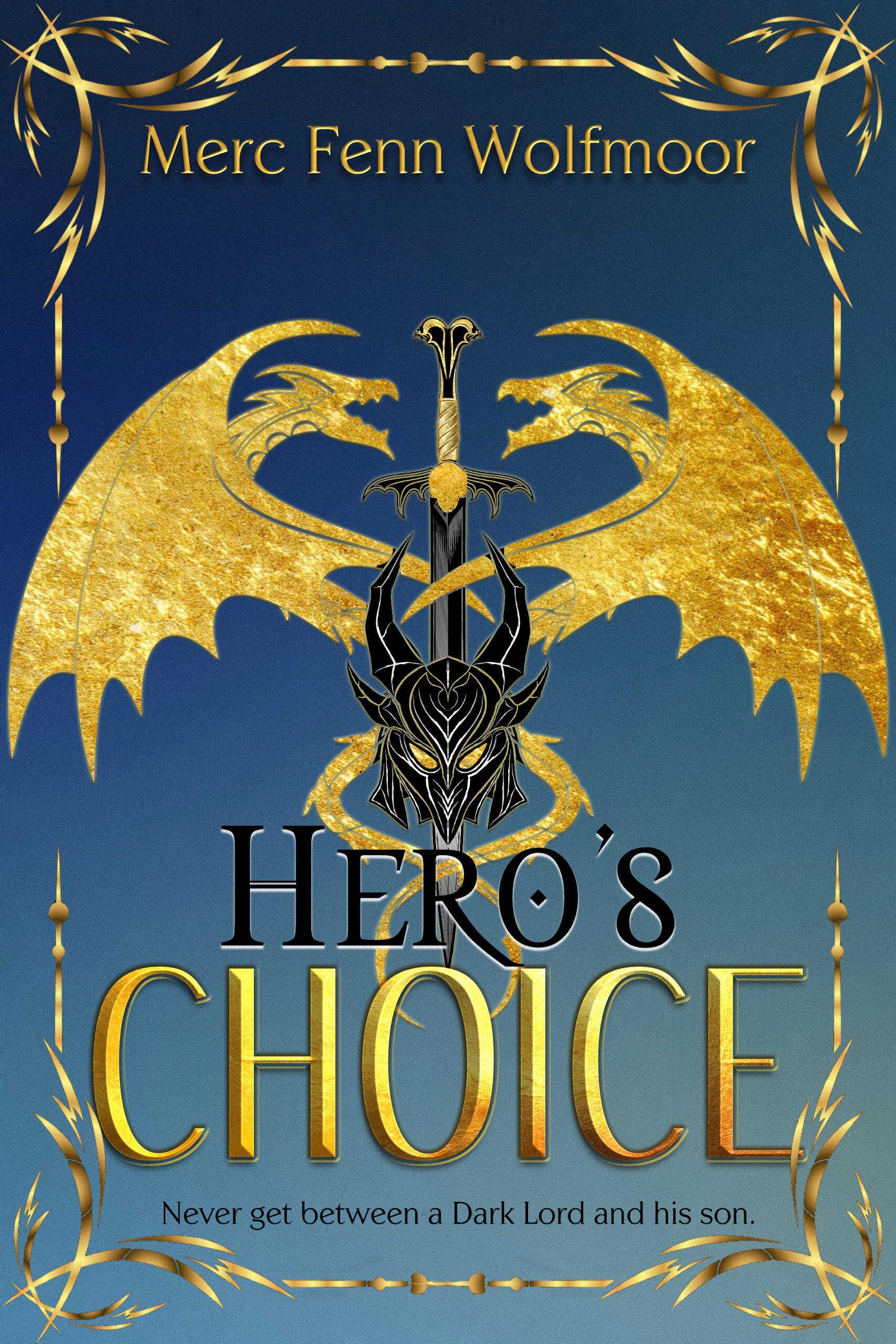 Never get between a Dark Lord and his son.Lord Mrakota adopts the boy who is prophesied to kill him and raises Hero as his own son.Despite the meddling of rangers, wizards, and Old Mentors, Mrakota protects and guides Hero to follow in his path as a Dark Lord.However, as Hero's fifteenth birthday approaches and everything conspires to lead him to a final confrontation with Mrakota, Hero doesn't know if he has a choice at all.Is he doomed to fulfill his destiny and kill his own father? 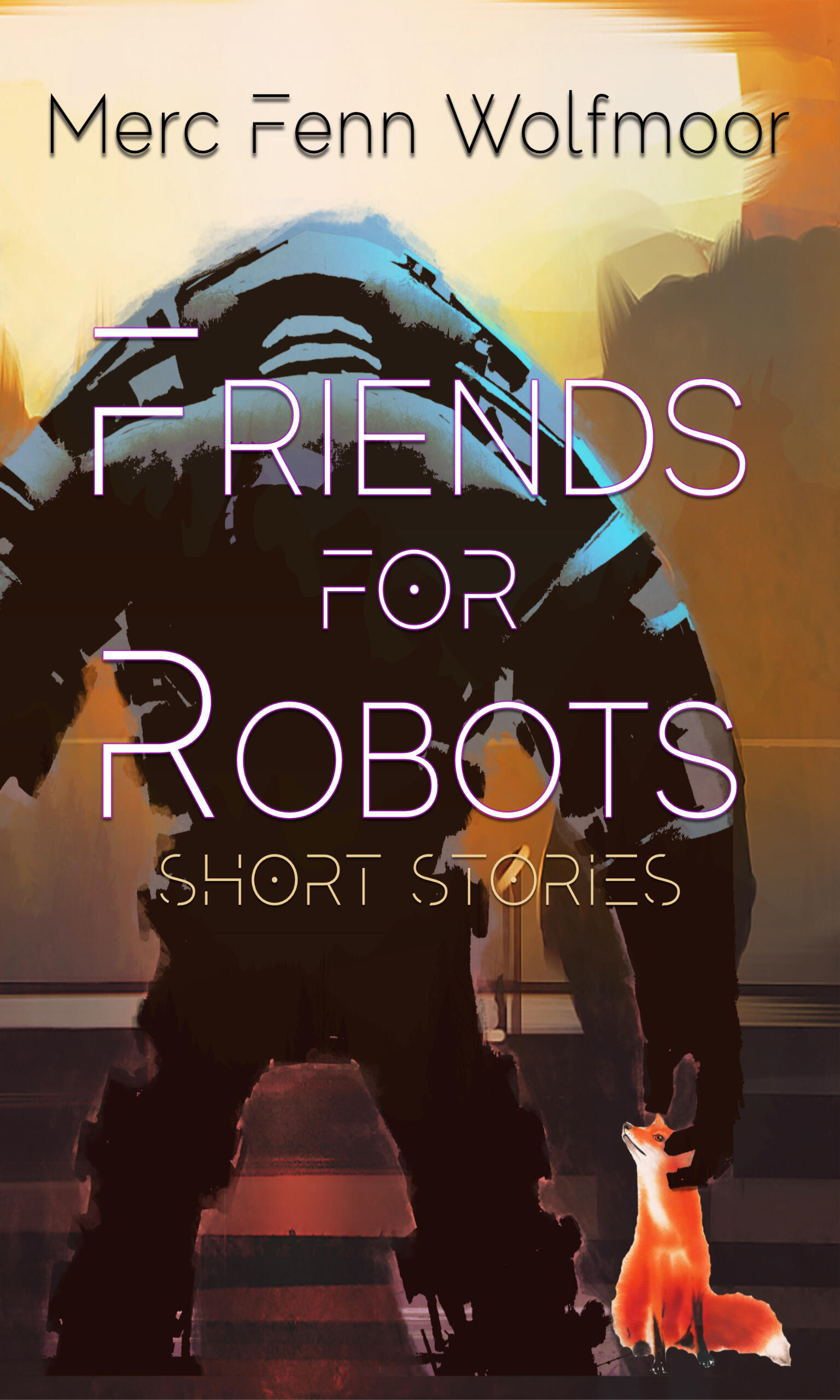 In this upbeat, positive collection of SFF short stories from Merc Fenn Wolfmoor, author of So You Want to Be A Robot, you'll find hope, humor, friendship—and of course, robots.Have you heard the one about...
...a neural network who wants humans to drink more water?
...a person stranded on Mars with only an obsolete robotic toy?
...a cyborg caught in a time loop with a frightened ship?
...a self-aware mech who doesn't want to be a weapon anymore?
...an AI sent into the deepest part of the ocean—and finds a god?You'll also meet entrepreneurial barbarians, an astronaut making first contact, a boy who might have (accidentally) started Armageddon, magical birds, a bot who wants to tell jokes, and more.Whether you're a robot or not, come make some new friends. :) 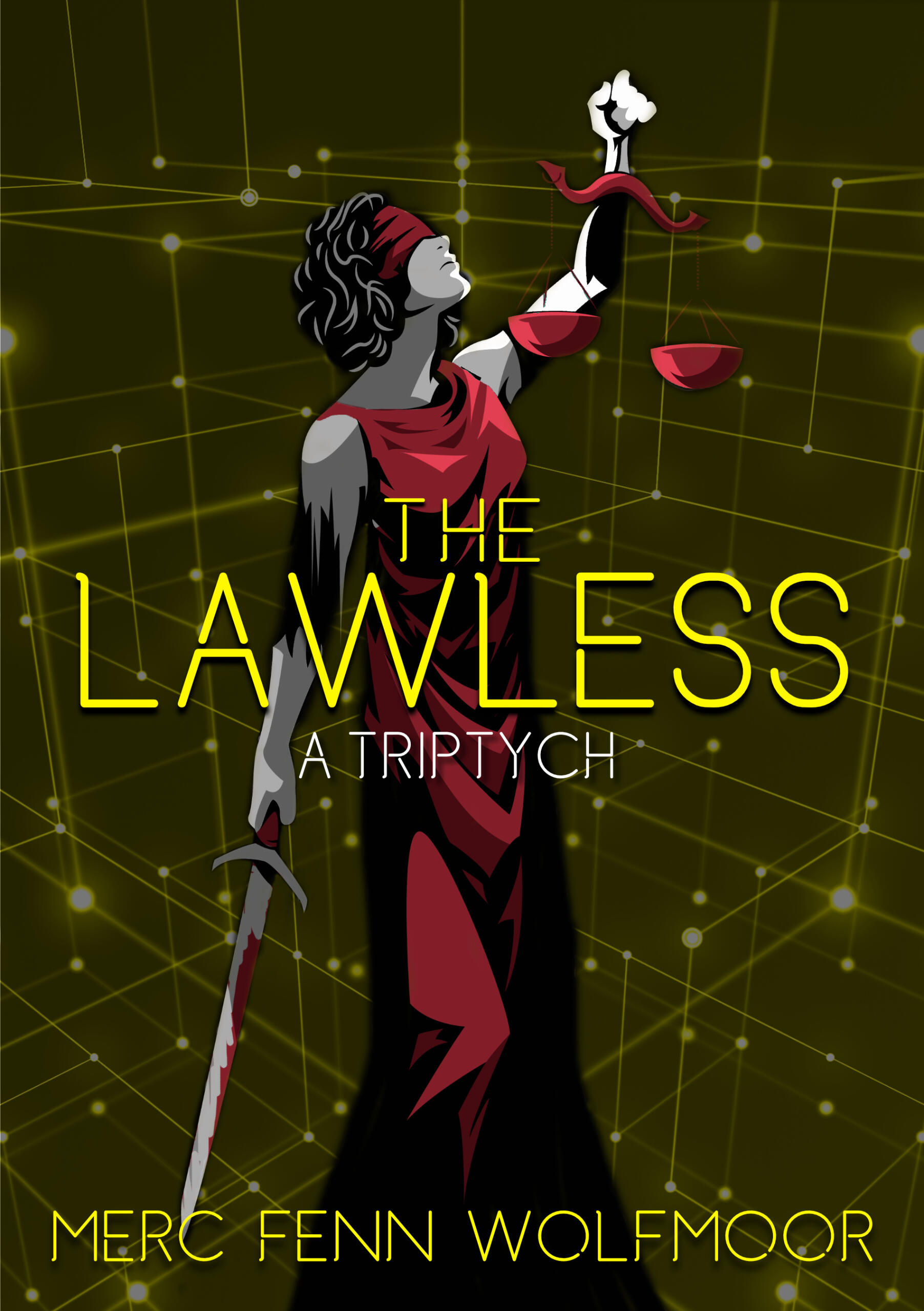 TRUST IN THE LAW
A Good Citizen follows all the Laws set forth by the benevolent Government. Trust the authority of the State. Questions are against the law.BELIEVE IN THE LAW
The Government cares about you. The Government wants you to be happy. Do not deviate from the Government's prescribed conditions of happiness.OBEY ONLY THE LAW
Never question the Law, for that leads to anarchy. Always obey, lest you be found undesirable. Undesirables do not deserve life. And you, Good Citizen, want to live, don't you?* * *The Lawless: A Triptych collects three interconnected dystopian SF stories, plus a bonus flash fiction piece about the unsettlingly probably near-future United States. 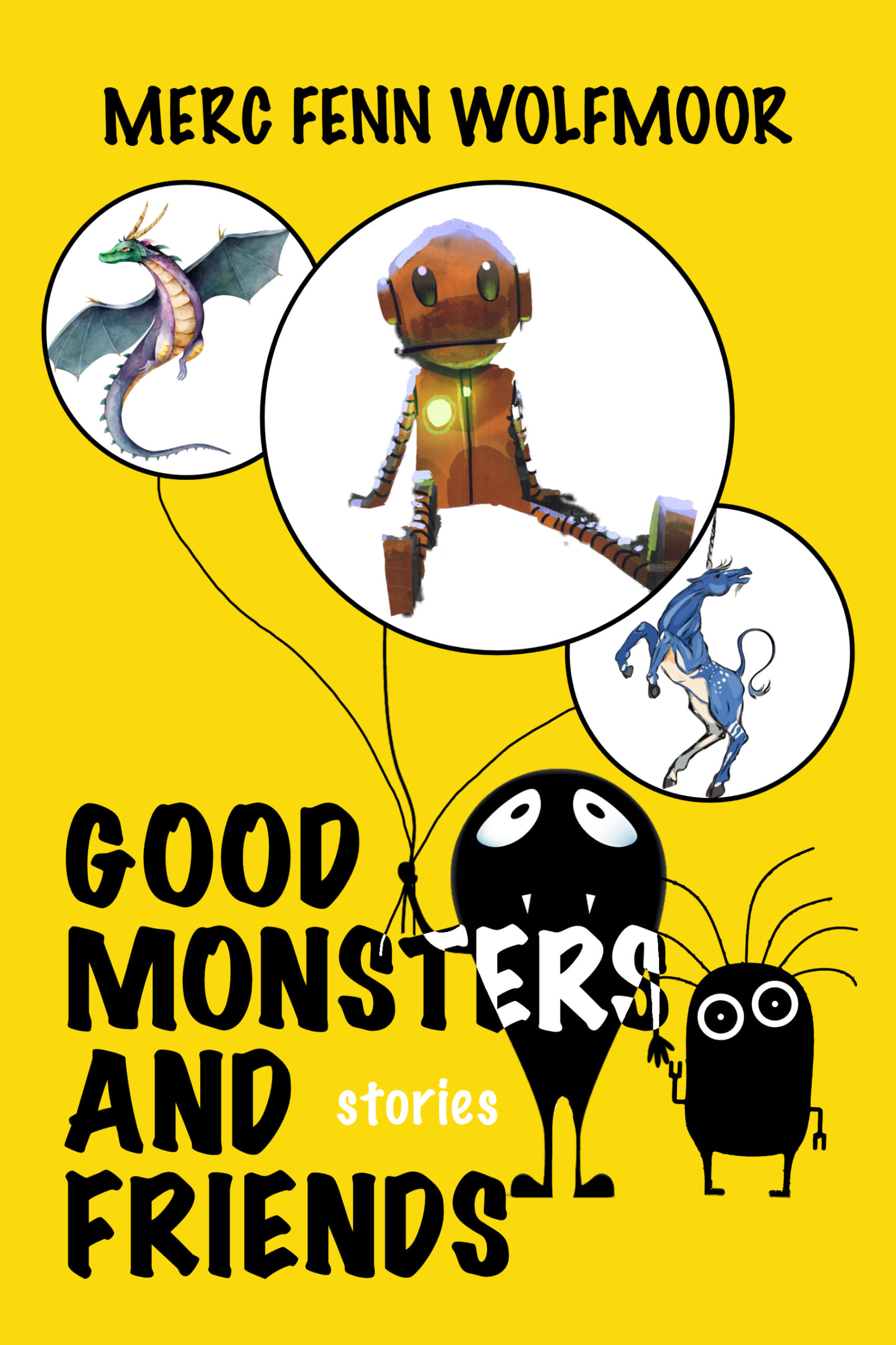 Making friends with monsters is easy—bring them cookies!A young man must find a new reality to live in when his disappears. Birds team up to right the wrongs of classic literature. An android raises baby dinosaurs after the human world ends. Grandma reveals how she invented intergalactic diplomacy...and more.Good Monsters and Friends collects 33 stories about astronauts and cats, dragons and witches, portals and quests, ghosts and robots, and, of course, all the monsters and their buddies. 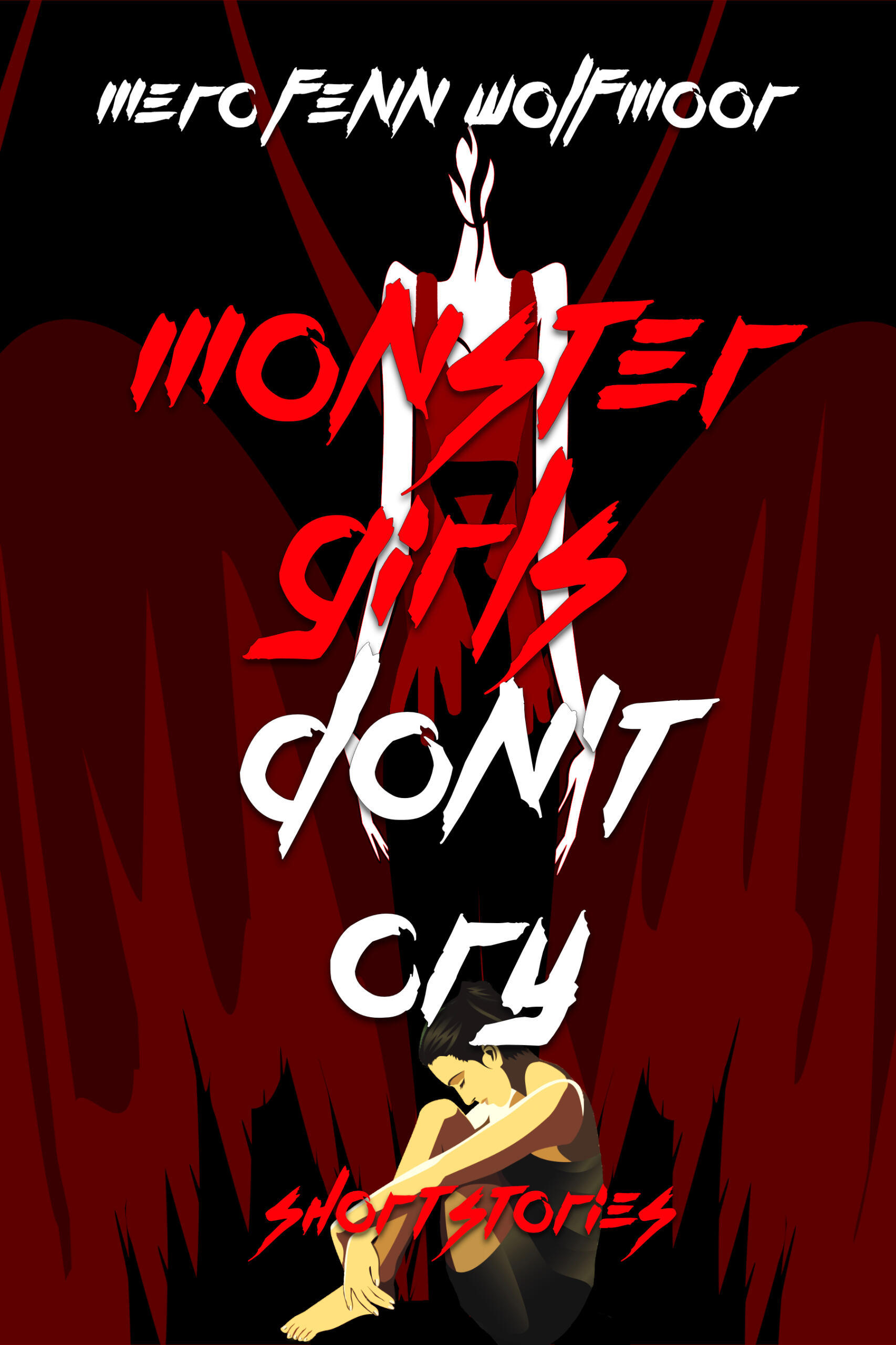 This will be a press kit, including bios of different lengths 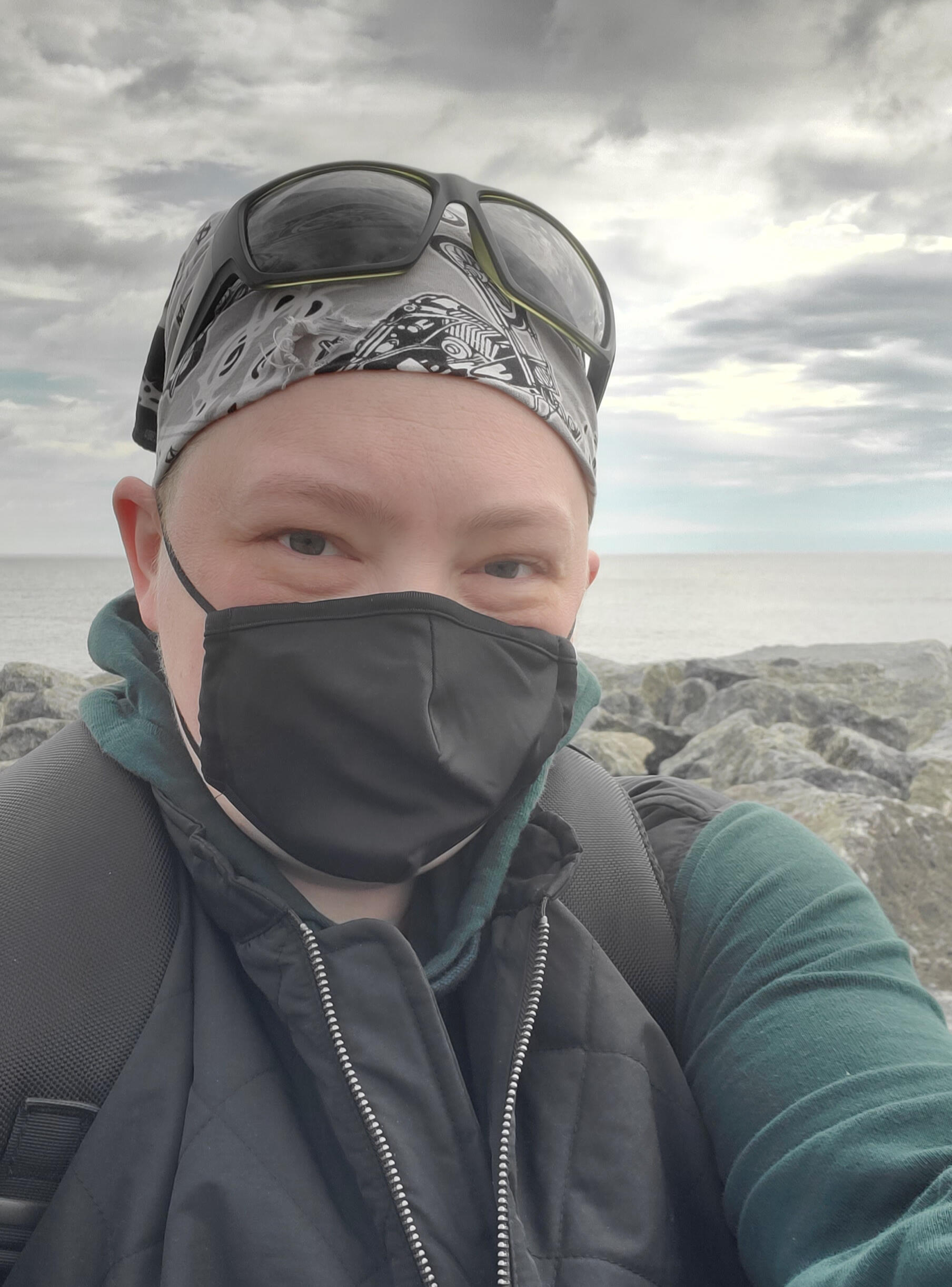 Merc Fenn Wolfmoor is a queer non-binary writer from Minnesota, where they live with their two cats. Merc is the author of several short story collections and the novella, The Wolf Among the Wild Hunt. They have had short stories published in such fine venues as Lightspeed, Fireside, Nightmare, Apex, Beneath Ceaseless Skies, Escape Pod, Uncanny, and more. Visit their website: mercfennwolfmoor.com or follow them on Twitter @Merc_Wolfmoor.